Since the beginning of this year, we have been in the process of renewing the Board of Directors of Fundeps, the legal authority that supervises the work of the Foundation team.

Juan Carballo, Paula Morales and Alejandra Galván have been members of the Council for the last two years. Now, that space will be made up of Alejandra Galván in her new role as President, accompanied by Emilia Pioletti, Juan Camusso and Mariana Paterlini.

We especially thank Juan Carballo for his years of collaboration. He was one of the people who promoted Fundeps from its beginnings, he was Executive Director from 2012 to 2019 and then served as President. Being a great colleague and an excellent professional, he laid the foundations for what was born as an initiative today to become a consolidated organization made up of a team of approximately 100 people.

With great joy, we welcome the nine directors, we thank them for their commitment and for accepting the challenge of promoting public policies from a human rights perspective. 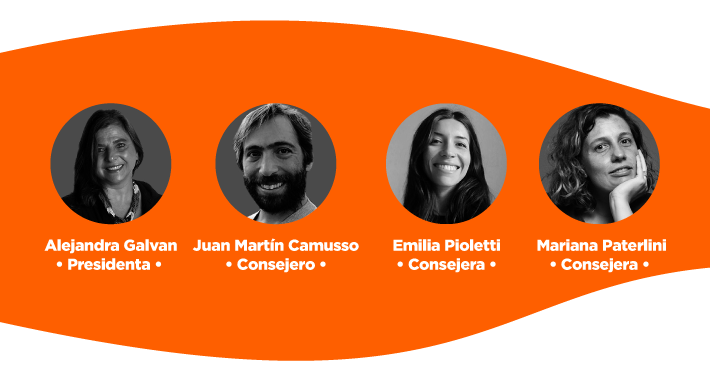 Meet the nine members of the Council!

Alejandra Galvan is president of Fundeps, and a member of the Foundation’s Board of Directors since 2020. Alejandra is a feminist activist, she has developed in civil society organizations dedicated especially to childbirth, birth, breastfeeding, with a rights perspective. She is currently finishing her Master’s Degree in Consulting and Management of Organizations at UMSA (University of the Argentine Social Museum). She is a member of the Area Council of Liga de La Leche Argentina and the Board of Directors of Awaike Salud y Medio Ambiente. From her Liga de La Leche Argentina, in addition to volunteering since 2001, she currently coordinates the Committee of the International Code of Breast Milk Substitutes; and she is a Communication Skills Facilitator. She was twice President and Area Coordinator. She is a Certified Professional Coach, ACSTH, Doula, in 2017 she finished the course in Introduction to Midwifery in the Tradition. She trained as a Technician in Business Administration at the Brigadier López Institute in Rosario. In her private practice, she is the owner of the 384 Group Litoral franchise.

Juan Martín Camusso is one of the founders of Fundeps in 2009 and has now rejoined the Foundation in his role as Director. Juan is a lawyer from the National University of Córdoba (UNC) and a specialist in International Cooperation for Development (University of San Buenaventura, Colombia) and has always focused his work on the defense of economic, social, cultural and environmental rights. He works in the Office of the General Defender of the Nation.

Emilia Pioletti has been part of Fundeps since 2017, working on issues related to media violence in the Gender and Diversity Area, and now she joins the Board of Directors. She is a Social Communicator from the National University of Córdoba (UNC) and has focused her work on the intersection between feminist militancy and communication. He has completed his postgraduate degree in Political Communication and Public Opinion at the Latin American Faculty of Social Sciences (FLACSO), the Diploma in People-Centered Experience Design at the National University of San Martín (UNSAM) and is currently studying the Diploma in Governance and Public Innovation dictated by the Development Bank of Latin America (CAF) together with the Catholic University of Córdoba (UCC). She works in parliamentary communication in the Honorable Senate of the Nation (HSN) and has been an advisor to several Senators. She also works as a journalist writing in community and self-managed media and is a radio columnist.

Mariana Paterlini is a feminist activist and her work has focused on human rights, international cooperation and development, framed in feminist economics. She is currently completing her Masters in International Development at the University of Warwick under the Chevening Scholarship 2021/22l programme. She completed a Master’s Degree in International Cooperation (UNSAM), has a Bachelor of Arts (UNT) and a Diploma in Civil Society Organizations and Public Policies (UNGS). She trained in Political Science and Sociology of Culture at the National University of Tucumán, and in Anthropology and Ethnography at the University of Gothenburg. She is a researcher and institutional coordinator at LatFem – Feminist Journalism. She was institutional director at Lawyers of the Argentine Northwest in Human Rights and Social Studies (2018-2021), where she was also previously institutional coordinator and coordinator of the Gender and Human Rights area (2011-2018). She joined Cruzadas, a lesbian activism organization (2009-2012 and 2017).