Currently, the Latin American region has witnessed a resounding change in the area of ​​large investments for development. Traditionally, international financial institutions (IFIs) played a fundamental role in supporting development projects in the region. The World Bank Group and the Inter-American Development Bank Group were behind the large investments in the infrastructure area.

This situation has been modified by the increase in the presence of the People’s Republic of China as the main investor in this matter. In this regard, it is necessary to highlight that this situation has brought about a strong discussion regarding social and environmental standards. Traditional IFIs have regulations that, while far from functioning properly in practice, minimally seek to ensure compliance with certain environmental, social and human rights standards in their projects. In the case of Chinese institutions, on the contrary, the situation is more complex, since in most cases these institutions lack transparency or clear and robust regulations in socio-environmental matters.

The consequence of the coexistence of these two groups of institutions – the traditional IFIs and the Chinese ones – has given a negative balance and this has been evidenced in the retreat of the safeguards in organisms such as the World Bank. In this sense, the current financing structure in Latin America has seen its standards fall, generating serious situations of violation of rights when launching large infrastructure projects. During 2016, 200 environmental defenders lost their lives claiming their rights before the advance of major oil and mining projects. 60% of those deaths occurred in Latin America and 40% belonged to indigenous peoples.

From this framework, the Regional Coalition for Transparency and Participation, brought together a group of civil society organizations with the aim of influencing the improvement of socio-environmental standards in infrastructure megaprojects. At the Fourth Regional Meeting on Human Rights, Transparency and Investments, held in Lima on August 30 and 31, the organizations gathered spoke for the urgent need to ensure the rights of environmental defenders. Likewise, the growing cases of corruption around the megaprojects and the lack of access to public information were highlighted.

The statement after the meeting noted that: “several governments have been addressing the right of access to public information as a mere administrative procedure, without taking into account that it is an instrumental human right to other fundamental rights, such as the right to life, to health, to freedom of expression, which contributes to the adequate and timely citizen participation and free and informed prior consultation. In this line, it is worrying that several international initiatives on transparency and access to information can not continue to advance adequately because there is a risk that we seek to lower the standards, as in the case of the Regional Agreement of Principle 10.” The large infrastructure projects then, today remain the scenario for the problematization of issues such as transparency and accountability.

Several governments in Latin America have joined the Open Government Partnership (OGP) and have therefore committed to implementing policies that promote transparency, access to information, accountability and participation. citizen This necessarily implies that these efforts to ‘open the State’ must expand to the environmental and infrastructure branch. Currently this is a pending debt and of the 3000 commitments assumed before OGP, only 54 belong to the field of infrastructure. Chile, Colombia, Costa Rica, the Dominican Republic, El Salvador, Guatemala, Mexico, Panama and Uruguay are the Latin American and Caribbean nations that have elaborated goals in relation to this matter. However, the problems persist and the situation of human rights around the megaprojects has been getting worse. In addition, after the Fourth Meeting of the Regional Coalition, it was highlighted that “it is important that the processes for the elaboration of the Work Plans of the Alliance for Open Government of the countries be truly participatory and with ambitious, measurable and relevant “. This is especially important when it comes to achieving the involvement and monitoring of society in public works processes (throughout the project cycle).

In Argentina this reality is replicated. Currently, large infrastructure projects are being developed that have been involved in corruption cases and whose information was not shared with citizens. We can mention among them: the hydroelectric dams in the Province of Santa Cruz and the trunk gas pipelines in the province of Córdoba.

The generalized situation of human rights around infrastructure megaprojects is alarming. There continue to be numerous cases in which nearby communities are harmed by this type of work. Added to this, the killing of environmental defenders has worsened in the last two years. In this context, we adhere to the Lima Declaration and urge Latin American governments to move towards more transparent policies on this issue. 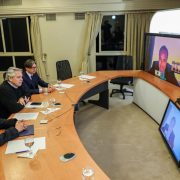 The 4th session for the discussion of a binding treaty on companies and human rights ended.

Transparency in the gasification project of localities in the interior of the...

Release of the NGO the selection of the person responsible for the Ombudsman’s...
Scroll to top