Five years ago, on June 3, 2015, after the news of the femicide of Chiara Páez and in the face of extreme sexist violence, we took to the streets and banded ourselves under the “Not a Less”. For this year, one of the slogans is “We are supported by feminist networks”. In the context of social isolation, various virtual activities will take place.

This slogan represents the fight against the most extreme consequence of sexist violence: death. According to official data, prepared by the Women’s Office of the Supreme Court of Justice of the Nation, in 2018 there were 255 direct victims of femicides. These reports are based on data from the previous year and the methodology consists of statistically analyzing the judicial cases in which violent death due to gender is investigated. According to the 2019 report, there were 268 direct victims of femicide and femicide victims and 5 transvesticides and transfemicides in Argentina.

You can also find current data that is produced by various social actors. The observatory of gender violence “Now that they see us” reported that as of April 30 of this year, 177 femicides had occurred.

In the context of a pandemic and taking into account the social scenario against the measure of Preventive and Mandatory Social Isolation (ASPO), the Adriana Marisel Zambrano Femicide Observatory of the Casa del Encuentro decided to relieve and publicize the number of women murdered since the 20th of March. As of May 28, during ASPO there were 57 femicides and linked femicides of women and girls. The data reveals that 1 in 6 victims had previous complaints, that 71% were murdered in the home and 65% of the aggressors were partners or ex-partners of their victims.

For her part, the Minister of Women, Genders and Diversity of the Nation told the Télam Agency that during ASPO calls for consultations to 144 increased by 40%.

Particularly in Córdoba, the Judiciary informed that since the extraordinary recess was declared, as of April 30, the Courts specialized in family and gender violence issued 1803 orders to restrict contact between the aggressor and the victim and 471 exclusions from the home to the aggressors.

Now how do we read this data? Male violence finds its source in gender inequality and its most extreme expression in the high numbers of complaints of violence and femicides. Added to this, the context of social crisis, deepened by the pandemic and the tool of social isolation, intensify the conditions of vulnerability of people living in contexts of gender-based violence.

The figures, the claims and the vulnerability are an alarm call to put in check the strategies that the State develops in the face of male violence. A few days ago, it was announced that the Network of People Crossed by Femicide and the team of litigation on Human Rights Justice and Reparation made a presentation before the Committee for the Elimination of Discrimination against women (CEDAW) for the case of the femicide of Florence Bathrobe. What is raised in the case, as reported, is the lack of protection and access to justice, by the Argentine State, in a context of gender violence.

In this scenario and as an achievement of the pressure exerted by the feminist movements, Tucumán adhered to the Micaela law. At the national level and in all provinces, mandatory training and awareness-raising on gender and gender-based violence for all persons in public service at all levels and hierarchies of the three branches of the State now governs. Micaela’s memory and many others demand that this law is not just one more box to complete. The gender perspective in public policies, norms, and access to justice must force the visibility of existing inequalities and generate strategies to make gender equality real and structural. For this, it is necessary to allocate the necessary budget and the political will to deepen structural changes.

As long as the old mechanisms of patriarchy continue to function, feminist movements will continue to raise flags on the streets and in (the) networks. 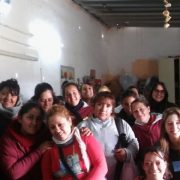 Salta: the doctor guaranteed the rights of the young woman to a legal interruption of pregnancy

Analysis of the Second Plan Joint Action between Argentina and China (2019-...

Report on Climate Change and the Rights of Women, Indigenous Peoples and Rural...
Scroll to top