The National Government published this morning a decree that canceled Resolution No. 3158/2019, which approved an update of the National Protocol for the comprehensive care of people entitled to legal termination of pregnancy.

The Ministry of Health of the Nation had approved by resolution, published in the Official Gazette last Wednesday morning, the third update of the guide that contains the guidelines and standards of care for cases of abortions allowed by law. The first protocol of these characteristics was prepared in 2007, and updated in 2010 and 2015, where the provisions made by the Supreme Court were incorporated in the FAL ruling of 2012.

On this occasion, the update had been carried out in the light of the new Civil and Commercial Code, which was sanctioned in 2015, particularly with regard to minors and persons with disabilities. These axes had already been included in an explanatory note, in September 2016, but the 2019 update incorporated them into the text. In addition, it contained the latest recommendations regarding medical procedures recommended by the World Health Organization. The most important thing is that, when approved by resolution, the protocol was granted a superior legal and regulatory entity, which would have allowed the actions for its implementation to be reinforced.

Several hours after its publication, in the afternoon, various media reported that President Mauricio Macri ordered that the resolution be annulled and that the Secretary of the Government of Health, Adolfo Rubinstein, be asked to resign.

Although in the morning there was no official decision, during the afternoon of Thursday the rumors were confirmed after a Cabinet Meeting, where Carolina Stanley, Minister of Health and Social Development, said that: “The protocol is going to be repealed because it was an unqualified decision of the Secretary of Health ”.

The decision was finalized with the publication this morning of Decree 785/2019, through which the resolution is repealed. Among the reasons stated, the Government argues that the Secretary’s decision was inconsistent with his superiors and other agencies that would have competence in the matter and that, therefore, should have intervened, such as the National Secretariat for Children, Adolescents and Family (SENAF), the Federal Council for Children, Adolescents and Family, the National Disability Agency, the National Women’s Institute (INAM) and the Ministry of Justice and Human Rights.

It is noteworthy that the cancellation of the resolution is based on these reasons, when none of the previous protocols (of 2007, 2010, 2015 and explanatory note of 2016) foresaw or required interventions by these organizations.

It is even more surprising that, as an argument, the impact of the protocol on the rights of girls and adolescents is emphasized, when this update, now frustrated, was adequate to the obligations of the Argentine State to be part of the Convention of the Children’s rights. In fact, in the last concluding observations of the Committee on the Rights of the Child addressed to Argentina, which were announced on June 1, 2018, the State was recommended to “guarantee adolescents’ access to abortion services without risk and post-abortion care, making sure that the opinion of the interested party is always heard and duly taken into account in the decision process”. This is precisely what the protocol update provided for, by adapting the guidelines on the consent of girls and adolescents to the provisions of the Civil and Commercial Code, based on the principles of progressive capacity and best interests of the child.

The reference to the lack of intervention of the National Women’s Institute, the governing body on issues related to violence against women, is also curious. The provisions of the Committee on the Elimination of Discrimination against Women (CEDAW) cannot be ignored because of its primary function of safeguarding the human rights of women in the States parties to the Convention, such as It is the case of Argentina. In the last Concluding Observations towards Argentina, of the year 2016, the CEDAW Committee expressed its concern about the stagnation of the maternal mortality rate, due, among other things, to abortions performed at risk; the limited access to legal abortion, in contravention of the legislation and the decision adopted by the Supreme Court of Justice in 2012; the frequent refusal of doctors to perform an abortion for reasons of conscience; and cases of prosecution against women who have undergone abortions. Therefore, he urged the State to initiate accountability procedures for non-punishable abortion, and to ensure that women have access to legal and safe abortion services. The update of the protocol was clearly in this regard, because it was an advance for access to the service, and reinforced the importance of rapid access to comprehensive care and practice, emphasizing first level care and medication treatments.

What makes no sense is the reference to the draft reform of the Criminal Code, and consequent relevance of the Ministry of Justice and Human Rights in this matter. What the protocol regulates is a health practice. Although the right to legal termination of pregnancy comes, among other rules, from the interpretation made by the Supreme Court in the FAL ruling of Art. 86 of the Criminal Code that is in force in our country since 1921, a supposed reform of that rule It should not prevent the standards of attention on that right from being improved, which is also an acquired right. Moreover, taking into account that the draft reform of this Code is extremely regressive in its regulation of abortion.

The repeal of the resolution that updated the protocol is unfortunate. The update constituted a breakthrough in the recognition of the human rights of women and pregnant people, in respect to human rights treaties, the principle of progressivity and non-regressivity, and the adaptation to the provisions of the Supreme Court of Justice of the Nation through the FAL ruling

However, the right to legal termination of pregnancy is not repealed, and is given by law: Article 86 of the Criminal Code, as interpreted by the Supreme Court in 2012.

Health teams should continue to apply the 2015 technical guide, with the explanatory note that was added in 2016. The decree only repeals the update, so the previous protocol remains in force.

It is imperative that state officials assume a serious commitment to our rights. The legal interruption of pregnancy is a fundamental human right, and political will is needed to guarantee its access in the best conditions. 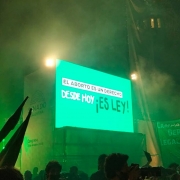 #25N: Is celebrated? International Day for the Elimination of Violence against...
Scroll to top