Yesterday, in the framework of its last annual session, the Chamber of Deputies of the National Congress sanctioned the law of Minimum Budgets of adaptation and mitigation to Global Climate Change.

The project promoted by Fernando «Pino» Solanas has the character of a minimum budget law, dictated within the framework of the powers that attend the National Congress under Art. 41 of the National Constitution. This implies that it must be applied throughout the territory of the Republic, including by Provincial and Municipal States. The regulation adds to the set of instruments of international law that regulate the phenomenon of climate change, that is, the United Nations Framework Convention on Climate Change, the Kyoto Protocol and the Paris Agreement, all ratified by the Argentine State .

Throughout its six chapters, the law includes, in broad strokes, general provisions, objectives, definitions and principles that guide public instruments and policies aimed at adapting and mitigating the effects of climate change. In turn, in chapter II, he creates the so-called “National Climate Change Cabinet” and an interdisciplinary Advisory Council. In chapter III, it demarcates the guidelines for the formulation of the “National Plan for Climate Change Adaptation and Mitigation” and the National Climate Change Information System. Then delineates measures and minimum actions of adaptation and mitigation, providing in its final part institutes linked to citizen participation and the right of access to information.

The brand new regulation establishes in large part of its articulated guidelines and objectives aimed at orienting public policies, while at the same time establishing norms of practical scope. Among some of them we can highlight:

Undoubtedly, the law constitutes, in some way, fulfilling the obligation that weighs on the States to provide a regulatory legal framework to the phenomenon of climate change. However, as it was argued, the great majority of the articles have an orientation dye, formulated around political guidelines. Contrary to what is established in the vast majority of minimum budget laws in force in our country, the newly sanctioned legislation does not have a substantial regulation regarding the rights of communities linked to effective ways to demand the prevention, mitigation, repair of damages caused due to the effects of climate change, as well as regulations related to access to «climate» justice, procedural rights in particular, updating of environmental management instruments, all circumstances that could have been contemplated in order to respond to those human rights that today are affected by the effects of climate change. A laudable advance, but certainly not enough. 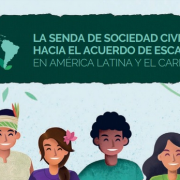