On January 7, the world was surprised by the untimely resignation of World Bank President Jim Yong Kim. With three years left to finish her second term, Kim stepped aside to take a position within the private sector. A possible conflict of interest and transparency in the definition of the Bank’s leadership, key issues.

Abruptly and unexpectedly, the president of the World Bank (WB) Jim Yong Kim, resigned his mandate to undertake a new job in the private sector. According to the official communiqué of the WB, during the term of Kim, special attention was paid to investments in infrastructure. He assured that the key to the advancement of the developing nations was the support and investment in this sector. For this reason, Jim Yong decided to step aside arguing that his work for global development would be more fruitful from the firm ‘Global Infrastructure’, a multinational company specializing in infrastructure investments for the water, energy, transport and waste sectors. .

Kim’s departure has not gone unnoticed, and numerous civil society organizations around the world have emphasized the possible conflict of interest in Kim’s surprise decision and wonder what will happen from this? In particular, they have raised a series of concerns:

According to the now ex-president of the WB, worldwide there is a deficit in infrastructure that would be around the trillion dollars. This amount, in no way can be covered, not even with the portfolio of all the institutions of financing for the development (IFIs) together. In this regard, Kim, during his tenure, has tried to ensure that financing for development, no longer oriented to the public sector, to turn to the private sector. In this way, the WB and other IFIs have increased their investment portfolio to financial intermediaries and other companies / private corporations. Kim’s decision to continue his professional career in the private sector raises doubts about the underlying interest in the decision to orient the World Bank towards the private sector. In other areas of interaction between the public and private sectors there are window periods during which those who have decision-making roles are prohibited from changing their sector (“cooling off periods” in English). The inexistence of similar mechanisms in the World Bank inevitably calls into question some of Kim’s decisions that in practice expanded financing to the private sector.

The change towards private financing, although it could be beneficial in economic and financial terms for the States, maintains concerns for environmental sustainability and respect for human rights. Recently, there seems to be a positive correlation between the increase in projects financed by companies and the growth of negative impacts on people’s lives and the environment. In addition, it is important to remember that during the mandate of Kim, the revision of the social and environmental safeguards of the WB – the regulations that establish criteria for the projects that the World Bank can support -, far from representing a strengthening of the policy, meant the transformation of these standards, a normative framework much more lax. The resignation of Kim then, leaves open the door to ask if the next president of the WB will have as a priority private funding, and if so, how the institution can adapt to international and national standards regarding respect for Human Rights.

Other questions that have arisen after this event, have to do with the next president of the WB and its selection process: Who will succeed? What will the process be like to elect the next president? Will the government of the United States be in charge of targeting the person who assumes the presidency, as has happened on previous occasions? In what way can the WB’s governance be more transparent when it comes to electing its authorities?

At the global level there is a tacit agreement that, since the beginning of the Bretton Woods system, has established that the head of the World Bank would be defined by the United States and the International Monetary Fund (IMF) by Europe. Over the years, this has been respected to the letter, with the White House, which has pointed to the president of the WB. Kim was no exception to this practice and was nominated by the government of Barack Obama. This process that has been taking place has little transparency and has always ended up transforming the World Bank into an executing arm of US government policies. In these times, a WB president appointed by the administration of Donald Trump would be risky when thinking about the performance of this institution on issues such as climate change and human rights in general.

Beyond the effects of a WB president appointed by the Trump government, Kim’s departure opens a series of questions about the bank’s governance and transparency in the appointment of its authorities. It is necessary to establish a transparent selection process in which all candidates have equal opportunities to occupy the position. The Chair of the Presidency of the WB must be occupied by a truly qualified person who has as a priority the execution of investments under the umbrella of sustainable development and human rights. The history of secrecy behind each WB president has impacted on the credibility of the institution. This vacancy, now, means an opportunity for the WB to reposition itself within the international system as an independent actor.

Kim’s departure for ‘Global Infrastructure Partners’ (GIP) has raised doubts about the appearance on the door of a possible conflict of interest. The multinational GIP is responsible for investing in infrastructure for developing economies, this being the main sector of interest of the WB. It is important to follow up on plausible agreements to be finalized between both institutions.

Regarding the vacancy for president, the WB has announced a nomination process for candidates that will be open until mid-March 2019. The civil society will be attentive and making a detailed follow-up of everything that happens to seek the transparency of the process. It will remain to be seen, once the next president is selected, what their main management guidelines will be and if they respond to the true development needs of communities and populations around the world. 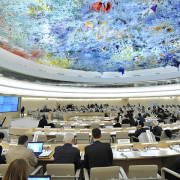 The situation of official advertising in Córdoba: electoral propaganda on the...
Scroll to top