Within the framework of the protests that have been taking place against the Punilla highway project, some of the environmental defenders who resist the progress of the project were summoned for indictment and in some cases there were arrests by the judicial authorities.

The defenders of the territory and the environment of Punilla have been resisting the advancement of the Punilla highway project for a long time. In the course of this resistance they are victims of different acts of institutional violence. We celebrate the ruling issued by the Court of Control and Misdemeanors No. 9 that resolves to make room for collective habeas corpus of a preventive nature presented in favor of the human rights defenders of Punilla, Paravachasca and Sierras Chicas.

In recent weeks, some land and environmental defenders have been suffering police persecution, submission to criminal proceedings, accusations by prosecutors, and there have even been arrests. Crimes such as threats and resistance to authority are attributed to them, within the framework of the various social protests that have been taking place around the advance of the Punilla Highway.

It should be noted that in a context of struggle and resistance for the defense of the environment, the demonstrations or actions given in the exercise of the right to protest cannot be distorted and manipulated for the illegitimate application of the penal system (which usually happens). Criminalization as a strategy to intimidate, disqualify the environmental claim and justify the use of public force and repressive mechanisms -deprivation of liberty-, constitute a grave and serious violation of fundamental rights and compromise the international responsibility of the State ( Escazú Agreement between them).

The persecutions, accusations, investigations and arrests ordered against Punilla’s defenders raise alarms and demand attention. Well, there are nuances that place the actions of the State under suspicion of criminalization as a method to silence social protest. The alleged threats or acts of resistance to authority, on which the accusations were based -according to what the defenders stated- were in the framework of a legitimate collective claim -social protest sustained over time- in an act in defense of the environment against of a project undertaken by the State. This should alert the authorities so that measures are taken to guarantee the protection of their human rights, and take extreme care in the event of any deprivation of liberty or violation of any other right.

The criminalization of environmental defenders stigmatizes while constituting an intimidation tending to frighten and as a consequence weaken the activities of defense of the territory and the environment until their disappearance. It is a duty of the State to protect the right to defend the environment and implement action measures that promote a safe environment free of violence, and that any human rights violation against it be investigated.

In this context, on August 24, the Judge of Control and Misdemeanors No. 9, in the case “Rocío Loza, habeas corpus” (File No. 11120830), in a novel and exemplary ruling, gave rise to a preventive collective habeas corpus directed to protect the fundamental rights of human rights defenders in environmental matters, residents of the valleys of Punilla, Paravachasca and Sierras Chicas. She points out that the institutional violence that the police of the province have been exercising against environmental defenders is serious and cannot be ignored by the State, which has the obligation and responsibility to give adequate custody to the environmental group in compliance with Escazú.

It also states that the members of the police forces are in charge of caring for society, “(…) those who must, with the power conferred by law, guarantee that all the inhabitants of this province live a life within the framework of the full enjoyment of individual rights, with the limit of respect for the rights of others, but without this being used as an “excuse” or argument to curtail other rights, in this case, those claimed by the environmental collective”.

It also states that the members of the police forces are in charge of caring for society, “(…) those who must, with the power conferred by law, guarantee that all the inhabitants of this province live a life within the framework of the full enjoyment of individual rights, with the limit of respect for the rights of others, but without this being used as an “excuse” or argument to curtail other rights, in this case, those claimed by the environmental collective” .

In that same sense, in an innovative sentence, the Judge resolves: to exhort the police of the Province of Córdoba to refrain from carrying out measures that imply limitations or threats to the freedom of movement of environmental defenders of the indicated localities; urge the Police Chief of Córdoba to inform police personnel that, according to protocols and current legislation, “deprivation of liberty only proceeds exceptionally and when it is absolutely necessary”; to recommend to the Government of Córdoba the elaboration of a protocol aimed at specifically regulating the practices and criteria of the security forces in social demonstrations that demand the protection of constitutional rights; entrust the Chief of Police to inform the provincial police of this sentence.

From Fundeps we repudiate the criminalization of environmental defenders, we urge the authorities to safeguard and protect the fundamental rights of those who resist and fight to defend the Cordovan environment, and we celebrate the recent ruling which constitutes an important advance in the recognition and defense of rights of the environmental group. 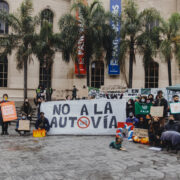 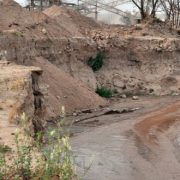