The Justice of Entre Ríos annulled a decree of the governor that authorized the fumigations to one hundred meters of the rural schools. Macri questioned the ruling.

The province of Entre Ríos has been going through a serious socio-environmental crisis for some time as a result of the agro-industrial model adopted at the beginning of the century, which in the aftermath of a false development attacks the health and quality of life of various communities. The big affected of this false progress are the agricultural communities, who saw their living conditions modified, many expelled to the big cities, and others survive immersed in fields full of soybeans and agrochemicals. These, the direct victims of the system, breathe, drink, eat, walk, study, replete with chemicals. Among them, boys and girls are the most affected because their health is more vulnerable and because they are in full development. In Entre Ríos, as in other provinces of the country, as in ours, Córdoba, rural schools are fumigated.
Remember that as the transgenic crop increases, the use of agrochemicals is greater, as it implies the use of millions of liters of these products. According to the Rosario Stock Exchange, the harvest estimate for April this year is 56 million tons, 60 percent more than in the previous season when 35 million tons were harvested. In this context, the excessive use and poor handling of these substances is daily. In addition, in legislative matters there is a regulatory diversity difficult to reconcile with respect to the distances of environmental protection areas and an immensity of application criteria and recommendations made by sectors with economic interests. Thus, and in the face of absolute inaction on the part of the State, the health of thousands of children is in grave danger.
Rural schools: first sentence in favor of health
In this context and through the hard work and commitment adopted by civil society and social organizations, immersed in a struggle that took years, in 2018, the Ecological Forum of Paraná, a civil association dedicated to the care of the environment and health, and the Association of Teachers of Entre Ríos, promoted an action of amparo against the province of Entre Ríos, so that immediately the State is urged to take the necessary measures to protect children and adolescents, teachers , teachers and non-teaching staff who attend rural schools in the province, the negative impacts that agrobiotechnology generates on soil, air and surface and underground water, and as a consequence on health.

The justice was issued in this regard by means of a judgment dated October 1, 2018, which prohibits land fumigation with agrochemicals around educational establishments within a radius of 1000 meters, and aerial spraying within a radius of 3000 meters.

The judge enforces the precautionary principle, which states that “when there is a danger of serious or irreversible damage, the lack of absolute scientific certainty will not be used as a justification to postpone the adoption of cost-effective measures to avoid environmental degradation” . In addition, the Provincial Government is condemned to the implementation of plant barriers, to carry out in a sustained manner over time the studies that allow the delineation of objective guidelines regarding the rational use of chemicals and agrochemicals, with the accent precisely on the prevention of damage. This ruling was confirmed by the Superior Court of Justice of the province.

The questioned decree and the second sentence

Last January, Governor Gustavo Bordet, trying to stop the situation and solve the problem of “legal vacuum”, obeying the demands of the agricultural sector, dictates the Decree No. 4407/18 by virtue of which the application is prohibited terrestrial product in a radius of 100 meters around rural schools and in an area of 500 meters for aerial applications.

In view of these circumstances, at the beginning of March, the case entitled “Foro Ecologista de Paraná and another C / Superior Government of the province of Entre Ríos” began, aimed at the declaration of nullity and revocation of the decree in question. The provincial justice dictated sentence on March 28, referring to the effects of the sentence issued in October, while the judge considers that having solved an environmental issue linked to the health of a specific human group, has erga omnes effects, the judge establishes that “until it is determined by the specific state areas that identical preventive effects will be obtained for the health of the students and personnel that attend them with different distances, it is forbidden both to the administrator (Government) and to this judge to evaluate if it is possible to more or less comply with the indicated prevention”. It requires the environmental report required in the first sentence, which must ensure that the practice questioned is innocuous at a certain distance from the schools. He then points out that “The violation of res judicata by a norm determines its nullity due to its unconstitutionality”. For this reason, it annuls articles 1 and 2 of Decree No. 4407/18 for violating the rights protected by res judicata.

Finally, the magistrate reflects that “in the end it happens that we are in the presence – as in so many industrial activities – of a restriction, which must be charged by certain individuals that is based on the interest of health – in this case of the students and staff of rural schools-, and in the care of the environment; but its origins must be sought in productive practices that at some time – or perhaps always – ceased to have full social consensus.”

This ruling was also appealed by the government of Entre Ríos to the Superior Court of Justice of the province, who must decide deciding whether or not the decree is in conflict.

Controversial statements by the President

Mauricio Macri in a visit to Gualeguaychú at the beginning of April, dedicated a moment of his conference to refer to the conflict. With his sayings he interfered in a conflict that is settled in the Judicial Power expressly violating the independence of powers-the essence of any republican system of government.

Macri defended the use of agrochemicals without control, saying that the failure puts at risk 20% of the agroindustrial capacity of the province, without taking into account the public health problem facing the province, and all productive areas of the country .. In line with the above, said that it is “an absurd law that is not based on any scientific rigor”, with respect to the judicial decision, the second in a few months, dictated by the justice of Entre Ríos. That the current government promotes this extractive production model was made clear with the Final Report of the Interministerial Working Group on Good Practices in Phytosanitary Applications, presented last year by the agribusiness and environment portfolios.

The sayings of Macri aroused all kinds of criticism and comments, mainly because it ignores the impact of health that the indiscriminate use of agrochemicals produces in people. Also, he is criticized that he, as the main representative of the State, has the duty to protect the health of the children and adolescents who attend these or other educational establishments.

Boys and girls from rural areas are threatened mainly in those places where they should be safe: homes, schools, communities. The protection of the Higher Interest of the Child is a principle and a commitment adopted through the signing of the Convention on the Rights of the Child, with a constitutional hierarchy. From this, it is the responsibility of the State to take measures tending to ensure the development of children in a friendly environment.

For Macri there is no “scientific rigor” that justifies limiting the fumigations, ignoring not only the precautionary principle but the various judgments that are carried out today. In the United States alone, Monsanto has already been convicted in two trials for being responsible for the cancer risks of the Roundup herbicide based on the controversial drug glyphosate.

In our country, there are already records. We have, for example, the trial of the Madres del Barrio Ituzaingó Anexo in Córdoba, in which the producer and the fumigator were criminally sentenced. In Entre Ríos, in 2018 it was also possible to condemn the producer, the president of the aviation company and the pilot to one year and six months of suspended prison for being responsible for contamination of the fumigation that caused damages to personnel and students of School No. 44, near Santa Anita.

However, public policies do not yet respond to this problem. The qualification of SENASA regarding the dangerousness of agrochemicals is insufficient. Glyphosate for example, herbicide that is thrown millions of liters in our fields, in Argentina is classified as CLASS III, blue band (little dangerous), while in 2015 the World Health Organization (WHO) warned about the linkage of glyphosate herbicide (the most widely used in the world) and cancer, cataloging glyphosate as “probably carcinogenic”.

The State is unaware of the battle that is being waged throughout the world to protect the right of children and adolescents and of future generations to enjoy a healthy environment. Enabling the violation of the right of these children to live in an environment that allows their development goes against their responsibilities. The State can not be passive, much less condescending, while daily fumigations occur that irreversibly damage the present and future of that generation. 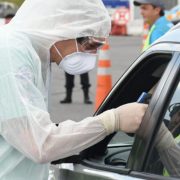 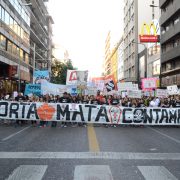 Revocation of the order to carry out studies on environmental contamination in Porta Hnos.’s case 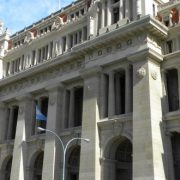 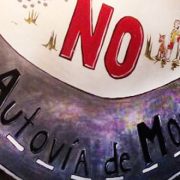 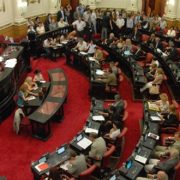 We denounce Eduardo Feinmann for his homo-hate statements about Facundo Nazareno...
Scroll to top