According to their testimony, the neighbors who claim against the Punilla highway project were violently evicted by the Provincial Police personnel from the camp they were carrying out in the vicinity of Molinari.

According to what they said, the security forces arrived at the camp in the early hours of the morning and evicted them illegally, using violence and without a court order. There, the neighbors, environmental defenders in the terms of art. 9 of the Escazú Agreement, they protested in a peaceful way.

These types of actions that oppose peaceful protest by the security forces, violate fundamental rights such as the right to protest, association, opinion and expression, putting personal integrity at risk, protected by the international instruments and by the National Constitution. In addition, they constitute a serious violation of the specific provisions incorporated in the Escazú Agreement.

Let us remember that the Agreement is an international treaty that is in force in the Argentine Republic and whose provisions must be fulfilled and respected by all state authorities, including the security forces and authorities of the three state powers.

Article 9 of the treaty obliges these authorities to guarantee environmental defenders a safe environment to act without threats, restrictions and insecurity. For its part, it obliges them to take adequate and effective measures to protect and promote the rights:
– to the life
– to personal integrity
– to freedom of peaceful assembly and association
– to circulate freely
– to exercise the rights of access to information, public participation and justice.
Likewise, it obliges to adopt appropriate, effective and timely measures to prevent, investigate and punish any attack, threat or intimidation.

These measures must be adopted by all authorities, even in response to the actions of the security forces. Along these lines, a specific and differentiated duty is generated in those state institutions whose purpose is the protection of fundamental rights, such as the Ombudsman’s Office, the Ombudsman for Children and Adolescents, Senaf, the Public Ministry or judicial offices.

In this framework, the legal system has some instruments for the specific protection of rights. Thus, habeas corpus serves to protect the person from any act that imminently and seriously threatens the loss of their physical freedom (without this preventing the authorities from acting in the event of a crime); or in the face of the effective deprivation of physical liberty, for example, in cases of arbitrary and illegal arrest or detention.

On the other hand, the amparo action allows protecting other constitutional rights (strike, protest, freedom of assembly or association, etc.) against violations by the State or individuals.

On the other hand, there are procedures that can be activated in the face of institutional violence, such as complaints for the commission of crimes by the security forces; complaints before the National Directorate of Policies against Institutional Violence, among others.

In this catalog, the Communications before the Committee to Support the Application and Compliance of the Escazú Agreement are added. Before this body it will be possible (once it is formed) to present a communication in the event of the violation of any right recognized by Escazú, so that it intervenes in the case.

When these tools are used, the authorities must pay special attention and respond in accordance with the standards imposed by the Escazú Agreement, beyond the duty to implement actions, policies and legislative reforms that allow guaranteeing a safe environment for environmental defenders of preventative mode.

From Fundeps we repudiate any type of institutional violence such as the one that the residents of Punilla unfortunately suffered -according to their testimony-. These practices must be prevented by the authorities, guaranteeing their non-repetition and a safe and peaceful environment for the exercise of fundamental rights, especially of those who campaign for the protection of the environment. 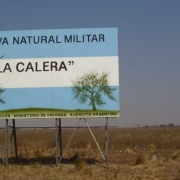 Rudi Borrmann of Local OGP and NGO of Córdoba: a meeting to strengthen tie...
Scroll to top