We note with concern the urgency and selectivity with which we are dealing with the problematic bill submitted by the National Executive Branch on June 12 under number 0010/PE/2017. This project, aiming to regulate religious freedom, incorporates the questionable figure of the institutional conscientious objection and generates mechanisms of institutional violence and violation of human rights.

This proposal not only jeopardizes the legitimacy of the legal system by proposing as a rule the possibility of excepting compliance with the law, but also seriously compromises the international obligations assumed by the Argentine State. This is so insofar as there is a great potential to obstruct the fulfillment and guarantee of many human rights, such as health, identity, non-discrimination and life free of violence, as well as to affect vulnerable groups such as children and adolescents , And people with disabilities.

Although the draft mentions several human rights treaties, it is widely misunderstood in their interpretation, in view of the many jurisprudential precedents given by our country’s courts in this area, as well as the recommendations of the corresponding human rights committees. In this way, it aims to erect as a guarantor standard, but in its drafting institutes mechanisms that preclude access to basic rights that must be guaranteed by the State.

Institutional conscientious objection, in practice, makes it possible to carry out generalized discriminatory acts against certain groups, historically relegated. Imagine a person who is in a position to request surgical intervention for genital reassignment, before institutions that by religious belief may violate their right to identity and psychophysical health in an institutionalized way.

The presumption of good faith granted by the project to the person exercising the conscientious objection reverses the burden of proof to the detriment of citizenship, making each person to judge each case, since the final interpretation of the constitutionality corresponds to the Power Judicial. This would generate serious mechanisms of institutional violence, and our State has acquired international commitments for the purpose of eradicating such violence. Let us not forget: in what democratic state can a person evade compliance with the law because his faith dictates it?

It also legitimizes the risk of children and adolescents, as well as persons with disabilities, when it enables its representatives to exercise conscientious objection on their behalf. This could lead to denial of certain medical treatments by representation, which has been widely rejected by our courts.

Likewise, in order to safeguard the rights of non-Catholic religious communities, churches and other denominations, it does not regressively recognize sexual and non-reproductive rights and international standards in this regard. In this regard, it should be recalled that conscientious objection is not recognized as a human right, and that the Committee on Economic, Social and Cultural Rights (General Comment No. 22 March 2016) stated that, should States regulate it , This must be done in a way that does not impact on access to sexual and reproductive health. This recommendation is not observed in the project, much less in the hermetic treatment that is being given.

On the other hand, and what is not less, it is possible to rescue that by definition legal persons and / or entities do not possess the consciousness or subjectivity that seeks to protect the notion of conscientious objection. What religion or belief can a legal entity claim?

A rule that seeks to incorporate, in a generalized, discretionary and presumptive manner, the exception to the fulfillment of legal obligations, seriously compromises legal certainty, the bases of our rule of law, and the exercise and guarantee of human rights. Religious freedom is already guaranteed by our National Constitution, and by human rights treaties with constitutional hierarchy. This bill only undermines its exercise, and in turn implies an express and serious acceptance that not all of us have the same duty of obedience before the law.

The pronouncement of the organizations

We adhere to the rejection letter to Bill 0010 / PE / 2017, prepared by the Abogadxs National Alliance for Women’s Human Rights, which is joined by more than 100 recognized organizations and institutions from all over the country, and more than 400 experts and law specialists.

This letter will be presented to the Commissions for Foreign Affairs and Worship, Penal Legislation and Budget and Finance, of the Chamber of Deputies of the National Congress, in order to make known the institutional gravity that matters the consideration of this project, and the concern for its Selective treatment. 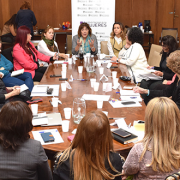 First meeting of the National Commission on Healthy Eating and Obesity Prev...
Scroll to top